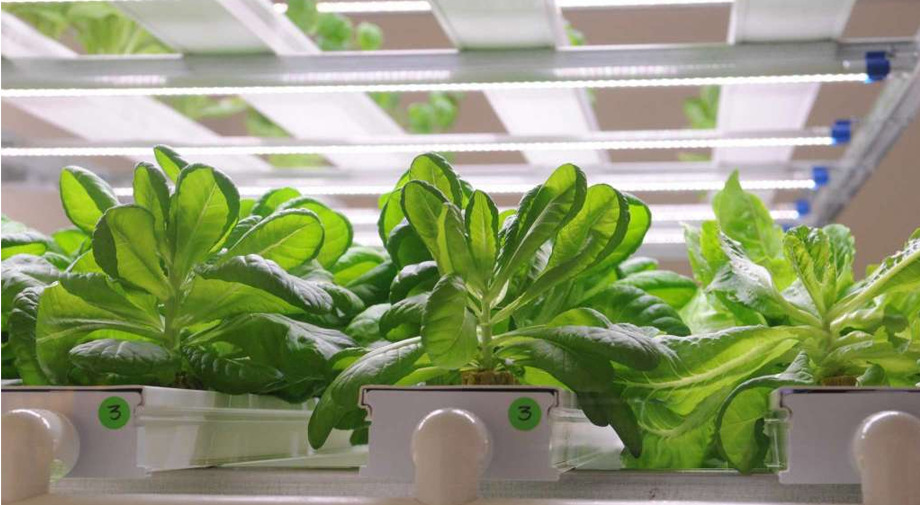 NORWALK — Every five weeks, Winthrop Baum and his development team harvest immaculately clean lettuce heads from a hydroponic urban farm within the walls of his office building at 25 Van Zant St. in East Norwalk.

That’s 10 crops a year, as compared to three grown in California’s rich Napa Valley.
But there’s no soil involved. At Urban Farm No. 1, lettuce plants sprout from racks of plastic piping through which nutrients recirculate. Special LED lights provide “sunlight” to fuel their growth.

“It’s grown in a controlled environment so it gets 16 hours of ‘sun’ every day,” said John Esposito, lead technician. “It never rains, it’s never cloudy and it’s grown in a nutrient-film technique, which is a solution of nutrients and water that pass underneath the root growth system which nourishes the plant, and we do a five-week program, from seed to harvest.”

Related Stories:
Sustainable Living Expo focuses on organic farms, living Westport family wins preservation award for 1830s home Additional parking in store for Ambler Farm?
Hydroponics entails growing plants in nutrient solutions with or without an inert medium, such as soil, to provide mechanical support.The plant roots often hang in water with a rich mixture of nutrients dissolved in it, according to Merriam Webster.

Esposito, a self-described “backyard dirt farmer” who converted to hydroponics, said the system produces a far superior product that’s nutrient-rich and not susceptible
to the weather, insects and other threats.

The four-tier, 4-by-10-foot growing system is able to produce 360 heads of lettuce. Under development for a year, Urban Farm No. 1 is now poised to expand to 5,600
square feet within the building.

“We have created the capacity to grow up to 100,000 heads of lettuce a year out of 5,600 square feet,” said Baum, owner of the building. “It’s all very technologically advanced. This is something very, very new. This was not possible a year ago. It’s taken us a year to develop this concept. And now we’ve proven it with our second completed crop.”

Baum said Urban Farm No. 1 relies upon a variation of LED lighting that wasn’t possible until recently.

“It was the light spectrum that could not be replicated indoors,” Baum said. “We’ve been able to do that, working with some manufacturers that we have.”

On the table of Baum’s office are green butter, sweet green crisp, butterhead and other samples of the nine gourmet lettuce types being grown in the urban farm and made available to local restaurants.

Baum said the development team is looking to distribute the lettuce directly to consumers and select restaurants in the area. He hopes to see the idea picked up in other urban areas.

“Every major city should have an urban farm,” Baum said. “A third of the cost of produce is taken up in the cost of trucking it. The average head of lettuce travels 2,000 miles to get to its market.”

By next spring, Baum said he hopes to hold a farmer’s market every Saturday at the building’s loading dock.

The expanding urban farm is a perfect match for culinary arts training, according to Borros.

“There’s an educational part of this,” Borros said. “We’re going to be partnering with schools and bringing students in to experience the growing cycle.”