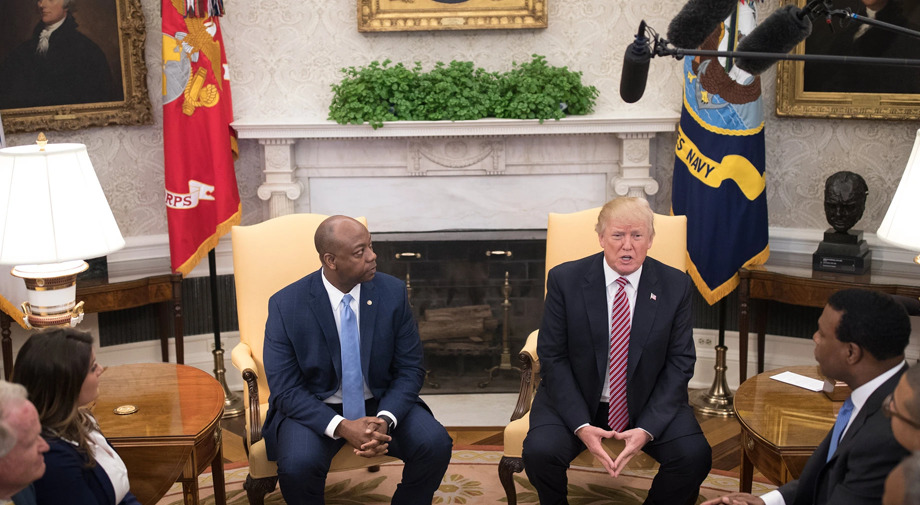 WASHINGTON — President Trump directed federal agencies on Wednesday to steer spending toward certain distressed communities across the country — part of his administration’s push to turn a tax break included in last year’s $1.5 trillion tax package into a broader effort to combat poverty and geographic inequality.

Mr. Trump signed an executive order at the White House to push federal resources to so-called opportunity zones — a small but lucrative provision tucked into his signature tax cut that in recent months has vaulted to prominence among real estate developers and other investors.

Mr. Trump told attendees at the meeting that the zones would receive “massive incentives” for private-sector investment. He said the goal of the order was to help “draw investment into neglected and underserved communities of America so that all Americans regardless of ZIP code have access to the American dream.”

The zones are urban, rural and suburban census tracts, designated by governors and approved by the Treasury Department, that either are high in poverty or border high-poverty areas. They are intended to bolster investment in areas that might otherwise lack interest by offering tax breaks to lure funding for start-ups, housing developments and other economic activity. Investors who fund projects in areas deemed opportunity zones can reduce — and in certain cases eliminate — taxes on investment gains.

Mr. Trump’s order seeks to encourage development in the zones and reassure investors that they are viable places for investment. It will create a White House Opportunity and Revitalization Council, covering 13 federal agencies and led by Ben Carson, the Housing and Urban Development secretary. The council will work to prioritize opportunity zones in a variety of federal efforts, including grant funding, loan guarantees, infrastructure spending and crime prevention.

The zones have come under criticism from consumer advocates, who warn that they may not drive investment to truly distressed areas. The official communities designated as zones include some census tracts that are rapidly gentrifying — which could end up delivering large benefits to wealthy developers who would have invested in those areas without the Trump administration’s tax advantage.

Among the designated tracts that have stirred controversy is the section of Long Island City that Amazon has picked for one of its two new headquarters. While the tract sits near a fairly low-income section of Queens, it includes a fast-developing area with wine bars and a view of Manhattan.

Administration officials said the new effort would address some of the concerns voiced by critics of the program, who say an investment incentive alone will not bring money to the large sections of America that have yet to recover from the Great Recession.

A White House official said that the 13 federal agencies included in the new council had already drawn up a list of at least 150 potential actions they could take to support investment in opportunity zones. Projects could include the Agriculture Department targeting water infrastructure and rural broadband spending in certain zones, or the Small Business Administration focusing certain loan programs in designated tracts. The Justice Department could also shepherd spending on anti-crime efforts — such as mentoring and gang-prevention initiatives — to the zones.

The investment initiative was adopted from a proposal by the Economic Innovation Group, a think tank started by the Silicon Valley mogul Sean Parker. Senator Tim Scott, Republican of South Carolina, championed the zones in the tax debate, as did Kevin Hassett, the chairman of Mr. Trump’s Council of Economic Advisers.

Mr. Hassett said that the administration “wants to create a race” for investors to pour money into the zones most in need of economic revitalization. He said the concept had helped energize philanthropists and investment professionals who worry about parts of the country being left behind economically and may need some incentive to direct their dollars there.

“If you talk about geographic inequality, and if you ask people in whatever audience you’re in, who here wants to try to help these places, everybody sticks their hand up,” he added. “But if you ask who has an idea how to help, no one does.”

The zones, and the administration’s commitment of public support for them, will give those people “a device to help the places they care about, maybe for the first time,” Mr. Hassett said.

Officials said the new council would need to decide whether to prioritize the hardest-hit opportunity zones for federal aid, or to keep the focus broadly on all zones, including those that may have pockets of economic success.

Along with Long Island City and several gentrifying portions of Washington, several other zones have prompted criticism. Those include zones that Bloomberg News and The Associated Press found contain properties owned by the family of Jared Kushner, Mr. Trump’s son-in-law and a White House adviser.

Administration officials still must finish what is expected to be two more rounds of regulations that will govern the zones and the funds that invest in them. Investors have warned that those regulations could unfairly narrow or expand the types of projects that will be incentivized by the zones.

An administration official who spoke on the condition of anonymity said Tuesday that the coming regulations would include a provision that analysts at the Brookings Institution, the Center for American Progress and elsewhere have pushed for: reporting requirements for investments in the zones, which would allow economists to evaluate whether the program was having an impact.