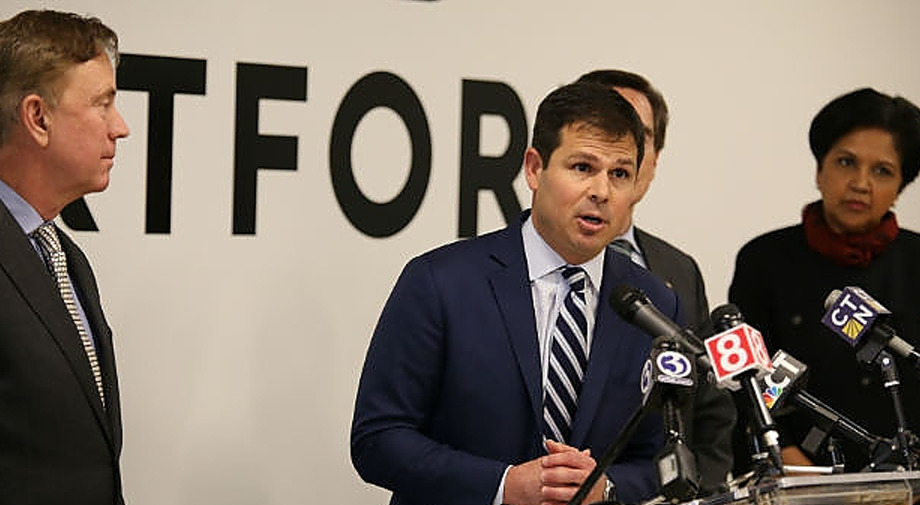 HARTFORD, CT — A high-level executive at Goldman Sachs who lives in Greenwich heard Gov. Ned Lamont’s first speech to the General Assembly on Jan. 9 and was inspired by his call to public service.

Lehman, 41, was nominated Friday by Lamont to become Connecticut’s next Department of Economic Development Commissioner. He will also serve as Lamont’s senior economic adviser.

Lehman, who will not take a salary, said he was attracted to Lamont’s “accessible style and pragmatic results driven approach.”

“That’s why I reached out three-and-a-half weeks ago,” Lehman said at a press conference.

Lehman is leaving his job at Goldman Sachs where he’s spent the last 15 years most recently as the global head of real estate finance and investment banking.

Lehman declined to say whether he plans to return to Wall Street.

“Leaving the firm was a tough decision,” Lehman said. “But I did feel moved by what the governor said.”

Having never worked in state government before, Lehman said he’s excited about the “unknown challenges” that exist.

Before managing about 100 employees in real estate finance and investment banking group, Lehman served as co-head of the Structured Products Group Trading Desk starting in 2006 and he gave testimony to a Congressional panel in 2010 about Goldman Sachs relationship with AIG, which insured the company’s credit default swaps. Those instruments were used to trade some of the risky mortgage-backed securities that contributed to the Great Recession.

Malloy and Smith were able to get the legislature to approve a “jobs bill” in 2011 that made it easier for them to offer small and large businesses financial incentives to stay and grow in Connecticut.

The amount of money Connecticut has given companies to stay and grow more than 250 jobs under Malloy’s “First Five” and then “First 15” program has been controversial with members of both parties.

How does Lamont feel about corporate welfare?

Lamont said he doesn’t believe Connecticut should “unilaterally disarm” itself by ending tax incentives to businesses looking to expand or relocate to Connecticut, but he doesn’t want to lead with them either.

“We’re gonna really focus on companies that ought to be here in Connecticut,” Lamont said.

Like Malloy and Smith, Lamont wants to reorganize how the department operates by partnering with the nonprofit Connecticut Economic Resource Center, Inc. to form an innovative public-private partnership known as the Partnership to Advance the Connecticut of Tomorrow (PACT).

The new partnership will be lead by Indra Nooyi, former PepsiCo chairwoman and CEO, and Jim Smith, former chairman and CEO of Webster Bank.

Lamont has known Nooyi since they were classmates at the Yale School of Management. Nooyi, a native of India, was instrumental in introducing Lamont to Infosys President Ravi Kumar.

Smith, who considered a run for governor and gave thousands of dollars to Republicans including Lamont’s opponent, was recently the co-chair of the Commission on Fiscal Stability and Economic Growth. The policies the group recommended last year included highway tolls and a two percent tax on groceries.

Lamont stressed that Smith’s work on the commission was separate from his new role at the partnership.

Lamont said Smith and Nooyi will be reaching out to business executives and CEO’s and talking to them about why they belong in Connecticut.

Smith said Lamont has an “uncanny ability to bring people together around common causes.” He said the business community is enthusiastic about Lamont’s plans for economic development.

Neither Nooyi or Smith will be taking a salary for their efforts.

Lamont may have support for his vision, but it won’t be easy to attract business to Connecticut with the current condition of its transportation system.

Asked if he can succeed at economic development without improving transportation, Lamont said flatly “no.”

“We have to upgrade that in a significant way,” Lamont said.

He said Connecticut needs a strategy that allows people to get from Hartford to New Haven to Stamford to New York on a timely basis. At the moment, “it’s a competitive disadvantage” to Connecticut.